Interview with Arne, the founder and editor-in-chief of Goazin.de, a new, young online magazine for the psychedelic dance community from Hamburg, Germany!

Hello, Arne! You are the founder and editor-in-chief of Goazin. de, a young magazine about the international psychedelic dance culture from Hamburg! Tell us about yourself: what motivated you? What drives you on and what is the goal of your extensive, lively coverage of the psytrance scene?

I am a 26-year-old psytrance-lover from the Hanseatic city of Hamburg and also a passionate lyricist – whether it be speeches, interviews, commercials, newspaper articles – I love writing. For almost 10 years now I have been going to the festivals and Gatherings of this scene and have been in love since day one. In the atmosphere, the music and last but not least, of course, the people. In short: into the Tribe spirit.

Well, and since almost everyone in this scene contributes something, be it jewelry, homemade clothes, my own music, decorations, party organization, etc. and I’m very untalented in all these areas, I asked myself the question of what I can contribute to the scene and its development. And the result was Goazin. de, communication. A magazine that looks at the scene from the perspective of the newer generation, not from the perspective of a music expert or globally networked scene gurus. And I think that’s why it’s so well received. I want to pass on the values I learned in this scene. Subjectively. Because I have the feeling that things like charity, mindfulness and tolerance are also decreasing with us and I want to prevent that. As far as I can.

What does psytrance mean to you, how was your first contact with this culture?

My first contact was the Trance-Floor at the Fusion 2008, which is a little bit of the outsider-floor and the people from the Turmbühne & Co. languages even a little bit scornful about it. But I fell in love with the atmosphere there and spent half the fusion on the Trance Floor. Afterwards we went on with small, illegal parties and then slowly increased to regular weekend visits in Hamburg.

Well, why the fascination hasn’t let me go? Because psytrance, with more and more smears, is the last real musical subculture I know. Besides, this music and people make you feel that there is simply “more” in this world. Spirituality and self-discovery are not so strong themes in any other musical scene and that fascinated me, because that is what the world needs today. And in my small world I just don’t want to miss this ingredient and spirit anymore.

How many festivals have you already attended, what was your personal favourite and which festival would you like to visit or write about?

A lot of them. It all started at the age of 15. My first festival was the Force Attack Festival (Punkrock). There followed a few more punk rock festivals until I slowly developed into electronic music. The following year the first merger. And well, since then I’ve been going to events almost every year. So far these have been Waldfrieden / Hai in den Mai, Indian Spirit, Shining Festival, O. Z. O. R. A., Psy-Fi, Antaris, VooV, Fusion, Midsummer Night’s Dream and countless Open Airs and other events in the area.

Where I still have to catch up, these are the international events. My next big goals are the Mo: Dem, Lost Theory, the BOOM Festival, Shankra, Burning Mountain and Tree Of Life. We’ll see what happens next. Writing I do about all the events I attend. In the near future I would like to concentrate more on the more familiar, smaller events that don’t necessarily focus on the line up and the floor. There’s just so much around and that’s what Goazin is for.

There are Mushroom Magazine, Chaishop.com & Trancentral as well as many other international sites reporting about the psytrance scene, what makes Goazin different?

Well, you would have to ask all the people who took it so positively. From my point of view it is the fact that, on the one hand, I bring a certain innocence with me. So I’m not a producer, DJ, promoter or anything. I just write what I experience in this scene. As a fan. And my focus is not only on music and events, but on all people who have something to do with this scene. And on the things that could interest these people, even outside of parties and dance floors. I am militant and I do not shy away from any discussions, I even like them because they make progress.

On the other hand, however, I am not only inexperienced but also very professional in online marketing, because I do this full-time. So I was able to reach more people on the net faster than others. Especially via Google. This was good for the visitors as well as for the organizers who promote their parties with me. In the end, Goazin has become a successful psytrance magazine because it not only reports about psytrance?

Well, first of all a lot has developed here. Even at the beginning, for example in Atisha. The best known, but also the most commercial acts of the scene come from this city. Thus, Hamburg Psytrance fans are known worldwide, at least the music from Hamburg. The city has always been the gateway to the world, so there is something for every music and scene to do. In addition, there is the city’s techno past.

But I think Hamburg is the capital of progressive trance, not psytrance. But I really wanted to leave these distinctions behind. Hamburg certainly has a lot to offer as an interface, but in both directions; underground and commerce. There is an active underground scene here, but also the biggest techno labels and record labels that have references and branches here. Recently, the rumors about Neelix Signing at “Kontor Records” showed quite well. At the same time, some of the biggest indoor events in Germany take place here, and the organizers and smaller psytrance labels are correspondingly present here. Neelix comes from here, as does Fabio, Klopfgeister, Kularis and also the organizers of the big festivals. Actually the perfect conditions to develop the scene strongly. Only where, that’s the question.

What do you think about the state, police and festivals in our scene?

Oh, gee, so many big words. And since I have never had bad experiences with the police at Goa festivals, I find it hard to make a statement. I was surprised by the massive police presence at the ForRest explosion (approx. 1,000 visitors) and the scarcely existent presence at the Antaris (several thousand visitors). I think that there is a lot of arbitrariness here, or according to the promoter’s popularity. I also find the blasting of any illegal parties questionable, because in principle only a few people listen to music together, mostly somewhere where nobody notices it anyway. Except for the one pensioner who calls the police. I think that, in view of the almost 100% non-violence at Goa festivals and the substantially lower alcohol consumption, events could be treated with more tolerance. And that this is also officially confirmed. Hardly any ambulance missions, no fights, relatively clean terrain that will be left behind – it is worthy of praise.

But anyone who has experienced the storming of the O. Z. O. R. A. Festival in 2012 knows that we have no reason to complain in Germany. In general, I can only plead for more binding and fair rules to be followed by EVERYONE, including the police.

Commercial vs. Spirit vs. Underground… where’s your place?

Somewhere in between. I’m not a complete commercial adversary, I haven’t been in punk rock either. It’s actually a good thing that more and more people prefer to listen to psytrance rather than Helene Fischer. That’s why I like it when discos dare to play this music. What I find a pity is that with commercialisation, there is always an alienation with the values of a scene and music genre. For one reason; the commercialisers don’t know anything about it. The aim must therefore be to pass on the underground feeling and spirit to the commerce channel, so that not only BTM consumption and fast electric music become more popular, but also the values associated with it, the atmosphere, and so on. And that is exactly where the problem lies: commercialisation is not carried out by the people who know these values, because those who know them are opposed to commercialisation. A symbiosis would be the solution here – if the people who love this scene would professionalize and commercialize it instead of leaving it to the capital. Or if the scene protagonists, for example, would advise the Tunnel Club on how to organise a real psytrance party on a large scale, instead of just mobbing against it. And that’s where I see Goazin’s mission – especially in the fields of advertising and online marketing.

Club or festival in the open air?

Can I answer very clearly. Club only if it has to be absolutely necessary, e. g. technical magazine, i. e. professional. Otherwise, I completely renounced the indoor parties because I just don’t feel comfortable there anymore. Then I have to switch to the Brazilian festivals in winter? 0 Well, definitely open air.

Very heavy! I hear so much more than psytrance, whether it’s hip hop, songwriter, etc. So currently I like to hear the album “Surrealistic Pillow” by Jefferson Airplane again, especially the song “Today” I love above all. LSDirty is just a bit hypemic on the road and the hype got me, too. Whatever goes is 1200mics, Berg and Juno Reactor. Favourite track is always what I listen up and down on my office headphones:”Believer” by Imagine Dragons,”Handlebars” by Flobots,”Black” by Danger Mouse and Norah Jones. And the Sesto Sento vs. Static Movement Remix by “Power of Celtic”, a 1997 classic by Shiva Shidapu.

Your message to the outside world?

Overcome yourself and you will overcome the world.

Thank you very much for the interview and we wish you and Goazin good luck! 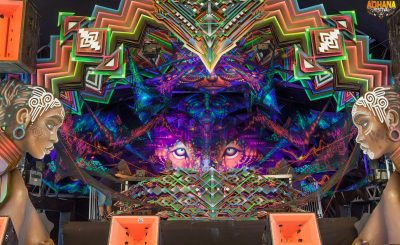