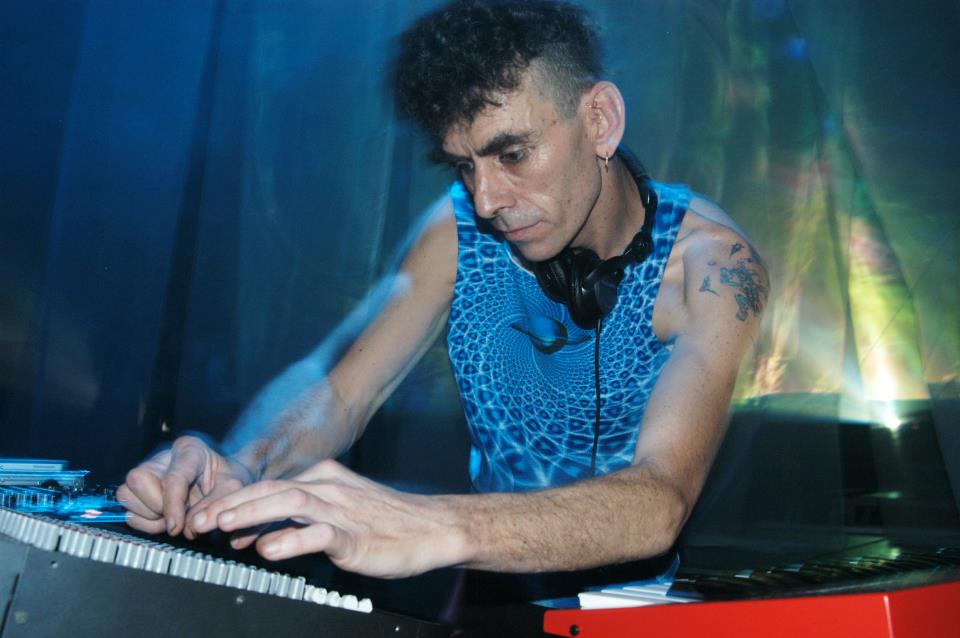 Olli Wisdom is the man behind the psychedelic phenomenon that is Space Tribe and its more than just music.

Olli is now based back in London, after 15 years living in Australia. Olli has been a pioneer of Psychedelic Trance for many years Space Tribe is one of the most well known names in the psychedelic scene thanks to his incredible energy in bringing us all things fun, exciting, tripped out and inspiring. Be it clothing, music, parties or just great vibes. For over 20 years he’s been globe trotting in his most unique of styles. Full fluoro outfits and mind bending, ear tickling, soul stretching music have been his trademark for longer than most people have been dancing.

In the early 80s Olli was the singer in the theatrical GothGlam band The Specimen, founded the famous London goth club “The Batcave“. After the band split up in 1986 Olli went traveling in Asia and in 1988 came to Koh Phangan in Thailand where he first encountered the fantastic electro-driven wild psychedelic parties on the beach. Instantly hooked, he immersed himself into the music and has never looked back. He stayed there for 2 years, DJing, and set up a small studio and making tracks for the parties, before moving to Goa, India. Over the next 4 years, Olli spent his time mostly in Goa, but now starting to travel around making parties in other places (San Francisco, Switzerland, UK, Japan), spreading the word and turning people on.

In 1993, Olli, his brother Miki, and fellow space cadet, Richmond, started Space Tribe clothing in Bali. The fractal fluoro party gear was an instant success, and now you can see it at parties all over the planet.

In 1995 the first Space Tribe tracks were hatched in the Butterfly studios with Simon Posford (Hallucinogen Sphongle), and everything flowed from there. Olli moved out to the rainforest in Byron Bay in Australia and set up the Rainforest Space Base studio. Space Tribe released the first album, ‘Sonic Mandala’ on Spirit Zone in 1996 and since then Space Tribe has released at least an album a year.

Since 2008 Jon Klein (Specimen, Siouxsie & the Banshees, Sinead O’Connor) has been bringing his sublime guitar skills to Space Tribe live shows in the studio…

Today, Space Tribe continue to travel all over the world, playing live at parties and bringing joy to the thousands of dancers who know exactly why they are there.

Space Tribe parties have lifted the spirit and tweaked the synapses all over the planet from Burning Man to Voov Experience, from the mountains in Japan to the beach in Goa…