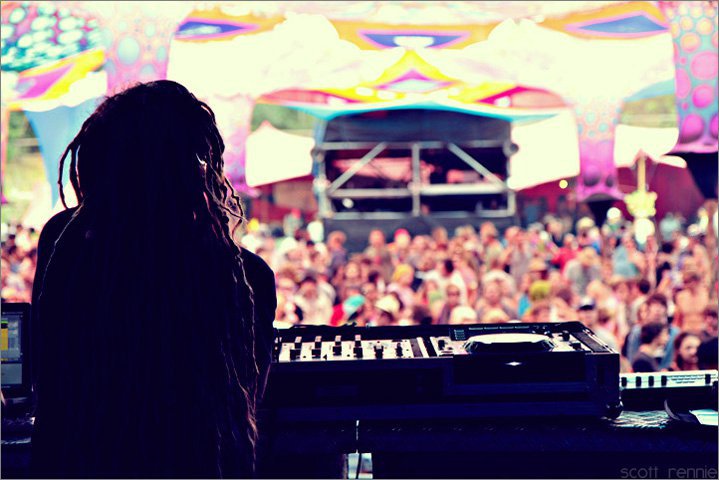 Daksinamurti (दक्षिणामूर्ति) is a psychedelic trance artist and Ethnologist from Marburg, Germany. Besides DJ’ing for over a decade, Till is managing the labels Sangoma and Timecode Records, and producing the Live act Android Spirit with his friend Josef (Tickets).

Daksinamurti prefers to play extended DJ sets far from predictability and stereotypes to create a colorful storyline suitable for dance floors at any hour of the party. His trance inducing sets are ranging from night to light – colorful journeys through energetic psychedelic trance with strong grooves, organic and tribal soundscapes and occasionally a blend of timeless Goa melodies in a forest friendly outfit. Till’s love for diversity and mystical themes are also reflected in multiple compilation releases he worked on – always evolving his perspective of contemporary psychedelic music and culture.

Biography:
In his early youth he fell in love with psychedelic music from the 1960’s, World Music and Reggae. End of the 90’s he discovered what was called “Goa trance” on the beaches and jungle parties in India, and was fascinated by the music’s driving beats, and hypnotic melodies vibrating in the air. He soon started to listen and collect tons of music, and hasn’t stopped since – developing a diverse taste for mind-bending music and studying its effects on minds, and bodies. Daksi is constantly on the quest to find new and exciting psychedelic music to release on the labels Sangoma and Timecode, which he runs with his label partner Emiel (Gata Freak) from Qatar.His passion for traveling, and curiosity in culture, mythology, and conceptions of worldviews lead him to study cultural anthropology and science of religion, which he finished with a magister decree.

Having played and traveled in many amazing countries and festivals on all continents, Till combined his passion for ethnology, music, and worked on various projects, and labels within the Psychedelic scene such as Shiva Space Technology, Nexus Media, Dacru and Peak Records among others.
During the years Till has built a everlasting reputation within the international scene; sharing his musical visions and vibes at various parties and festivals like Boom (Portugal), Universo Paralello (Brazil), OZORA (Hungary), S.U.N Festival (Hungary), Hadra Trance Festival (France), Rezonance/ Alien Safari (South Africa), Universal Religion (Nepal), VuuV, Antaris, Fusion, Freedom Festival, Psy- Fi (NL), Waldfrieden …

Projects:
Daksinamurti’s live project “Android Spirit” together with his friend Josef (Tickets/Brethren) was launched in 2013, and they soon released their debut “Synthetic Organism” on Timecode Records in 2014. Both, if not touring, are constantly working on fresh music in their Germany based studio and been releasing music on labels such as Phantasm, Timecode, Digital Psionics, Sangoma /Blue Hour Sounds, Fractal, Forestdelic among other.