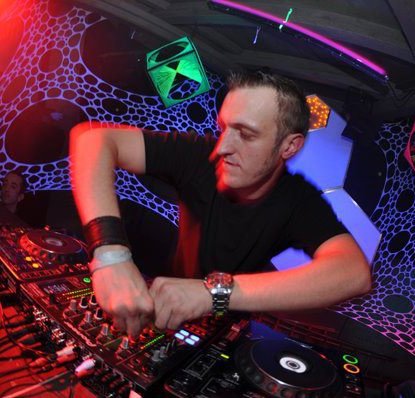 Genre: Psychedelic Trance – moon to sun, no Dark, no cheese – from full power dancefloor Funk to the deepest Forest.

Michael W. is Dj Cosinus born 1979 in Germany. He discovered the world of electronic music at the young age of 13, inspired by artists like Yello, Kraftwerk and the hard rhythm of Detroit techno and house music. He started his first steps behind a pair of turntables and a mixing desk at a local youth club in his hometown in Germany at the age of 15.

In 1997 he started to work as a resident Dj in several techno clubs in the southern area, he also played at parties all over Germany, shared the stage with the big names from the German techno scene. 1998 was the year he changed his musical direction completely – he discovered the world of psychedelic trance and very quickly he started to collect and play this “secret” sound at small private underground parties all over Austria, Germany and Switzerland. In 2008 he moved to in Switzerland, where he played for Fractal Records, one of the best local organizer and record labels at this time. In 2010 he joined the Sangoma/Timecode Tribe and compiled with his label Brother the very successful compilation “Ironic Creatures”.

His style can best described as pumping, groovy, snarling, epic forest trance – strictly no cheese. Fits perfect for the early sunrise times, but he also loves to tell weird psychedelic night stories. The music is hard powerful underground trance for acid heads. Described as a kicking chaotic jamming music machine Cosinus is delivering strong sets (between 145 up to max. 150bpm) quite far away from the typical form of commercial trance.

Cosinus also started to produce his own music again in 2015 and he is now also available for live sets with his typical deep, psychedelic style or as he says “a fusion between forest and deep psychedelic night time stuff.